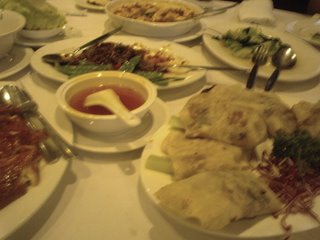 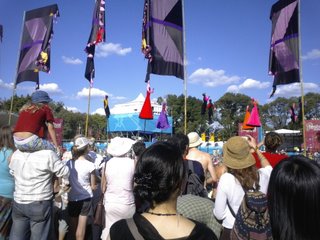 The performers on stilts performance 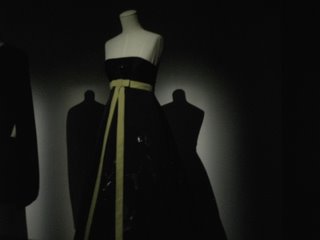 The nice gown at the NGV 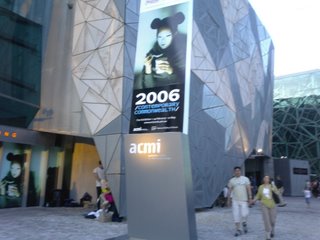 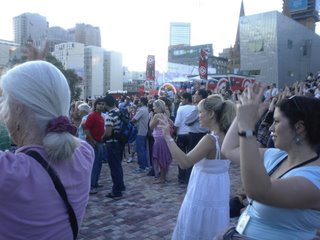 Girls shaking along with Bollywood music! 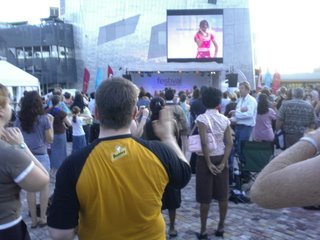 Bollywood dancing workshop at Federation SQ part of Festival Melbourne
In conjunction with the CW Games, there was the Festival Melbourne free events which i went as i said in my previous post (previous post on Docklands with Taiwanese friend). I went to see the free art exhibition 'Contemporary Commonwealth' at the NGV and ACMI at Federation Square and it was better than i expected! The program at the ACMI was really good and i would recommend the art installation called 'Instant Asia!' by Singapore's Brian Gothong Tan...the installation on a parody of 'Memoirs of a Geisha' is extremely hilarious and even better than the parody circulating around the internet! Geisha is re-made Malaysian style!!! Some people may find it vulgar but i liked it....i won't give away the details but one funny thing is that sayuri is bought in 'ringgit' and there are alot of other comedic stuff too like a spin on singapore's tourism line 'Singapore, Truly Asia' which is turned into...'that is why they call me 'Mameha, Truly Geisha'....fso or those in Melbourne, be sure to go to the ACMI if just for this hilarious installation!! (until May 21)
The NGV had artistic pieces which were a tad too deep but i liked the gowns on display in one section which were truly exquisite....

On Fed SQ i managed to catch the last 10 mins of Bollywood dancing which was fantastic!!
I also saw the fish display at 9pm with their fountain spouting and light display....

On Sat 25 March, i went to see some more Festival Melbourne events and was planning to go see the Bollywood on the Bowl at the Sidney Myer Music Bowl...we went to see the arts performance whereby performers walk on stilts and it was interesting...then just walked around and took photos....had dinner at Kunming Restaurant in Chinatown which was delicious and had Peking Duck which was sumptious and awhile now for me.....then we made our way to the Sidney Myer Music Bowl on the CRAMMED tram (which reminded me of Tokyo rush hour!) but by the time we got there, it was already closed off with a large crowd standing outside....so sadly, we found ourselves a spot outside on the lawn like many others and sat down chatting whilst listening to the music... and the topic came to WW2 and Japan. There were a few of my japanese friends (the other was this Chinese girl who was M's friend and JJ)including the swimmer body japanese guy in my previous post. I of cos got into a heated discussion with him as he brought out all the excuses made by the right-wing on why Japan should not pay Asian victims and also things like 'not all comfort women were forced, some did it cos they were very poor and had no other choice' or 'john rabe's diary on the rape of nanking could have been falsified with the Chinese govt paying someone to write it' or the most used excuse ' it was war'..one wonders why the Japanese government takes the viewpoint it does with ppl like my friend working in it (remember he works in the Cabinet office)...in the end neither of us changed our views and he continued to insist that the Japanese government must put the interest of the japanese ppl first which means not paying or apologising to the Asian victims of WW2 as doing so would entail compensating its own citizens as well for forced labour and the draft. After the chat, we turned to less serious stuff and went to the riverside to watch the Fish Display again.... a fun day!

WAH, u been blogging so regularly lor.That;s really good lar

ana[lua]: thanks! I like it too...glad to have someone from portugal which is quite rare really...