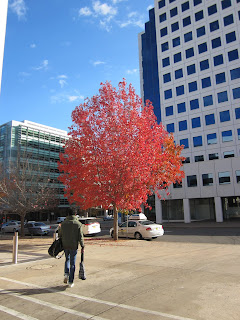 I went to Canberra towards the end of May during Autumn time..this is my 3rd time to Canberra, and frankly, Canberra is my favourite city/town in Australia for a holiday destination.
Basically, there are places where I feel something special or a special emotional connection to as well as places which i like as a vacation destination. For instance, Melbourne, Tokyo, Taipei, and Penang are cities which I have a special emotional connection to, whilst places like Macau, Bangkok, and Canberra are vacation destinations which I enjoy.
I've been to Canberra once in Autumn, on my first trip actually, when I was there on a day trip to renew my then expiring passport at the Embassy as I was told it would take only a mere day to have it renewed whilst if I waited in Sydney, it'd take between 3 to 4 weeks before I'd get it back from the Sydney Consulate. I'd already notice the auburn red maple trees planted within the Australian Parliament House grounds then but it didn't really hit me until this trip, how gaspingly wonderful the autumn colours and maple trees of Canberra really are!:-) ( My previous visit, my 2nd time to Canberra, was during Spring in Oct'08 for the famous Canberra Floriade Tulip Festival of which I attended the Night Floriade as well as the Nara Festival which so happened then and which i was lucky enough to pass by.)
I would definitely recommend visiting Canberra during Autumn time just because of the wonderful and awe-inspiring Autumn foliage and colours around! It's really jaw-dropping, for lack of a better word, especially the areas around Lake Burley Griffith and the International Flag Display promenade lakeside...omg, the colours are something i've not seen in a loooong time, and difficult to find in a densely populated city such as Sydney. During spring, winter, and summer, you cannot find these awesome colours, as the trees either all turn green in colour or wilt away during winter.
The best way to travel around Canberra, taking in the sights is definitely via bike, which can be from Mr.Spokes Bike Hire near the Lake (google for details) and its currently $35 for a whole day with chain and lock as well as helmet. All the key attractions are reachable via bike and the views are simply amazing lakeside (especially with the autumn auburn colours in full display during autumn time). I took so many photos as I was so surprised that I could see and experience this beauty of Autumn in Canberra!! I hadn't expected the fantastic and beautiful scenery which I usually associate with tv dramas shot in autumn time Japan or South Korea. It seriously looks like one of those scenes from S. Korean romantic tv dramas with the maple trees in full bloom and the willows and autumn trees in full, swaying amongst the autumn breeze. The weather was fantastic too for cycling, cold, but not too cold, like winter.
Major attractions I visited are as follows: 1) Embassy District (where all the different national embassies residing in Australia mostly are situated) with the Chinese Embassy being the most prominent amongst tourists and residents alike for its unique archi and huge compounds, it has archway pavillions and even a tennis court inside. 2) International Flag Display promenade 3) Sculpture Garden, National Gallery, 4) National Portrait Gallery 5) High Court, passed by 6) National Archives of Australia 7) Old Parliament House Gardens 8) Parliament House 9) Canberra Glassworks 10) Old Bus Depot Market which was having a free concert performance as part of the Canberra International Music Festival 11) Doing the 'Bridge to Bridge' cycle across Lake Burley Griffith.
I didn't visit the famous War Memorial and National Gallery this time round given that I'd already visited the War Memorial twice and the National Gallery once on previous trips already.
Anyways, I also managed to squeeze in a quick walking tour of the Canberra City Centre and visited Canberra Centre again and had dinner at a Japanese Ramen place in the Canberra downtown area which was delicious after cycling for the entire day since the morning!
Great Canberra Autumn Cycling Trip it was, definitely highly recommended for residents and tourists alike in Australia, go during Autumn time!!:-)
Please go here to see more photos: http://hcpen1111-canberrainautumncyclingtrip2010.buzznet.com/user/photos/
Posted by hcpen at 10:55 PM 8 comments: