I celebrated the Lunar New Year here in Sydney this year by going to the Twilight CNY Parade as well as Dragon Boat Race at Darling Harbour. I've been to both events twice already, going there last yr too:-)

The Lunar New Year is celebrated in quite a big way here in Sydney and that's great for me given that CNY is one of my biggest festivals in the Chinese calendar.

Photos of both events below: 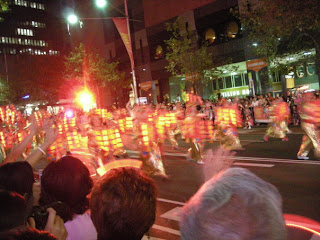 Above & Below: CNY Twilight Parade along George St (Sydney's main thoroughfare in the CBD). 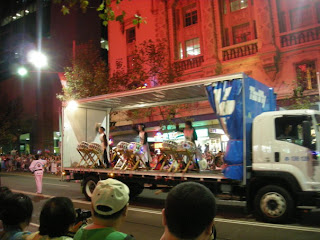 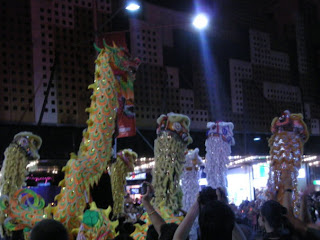 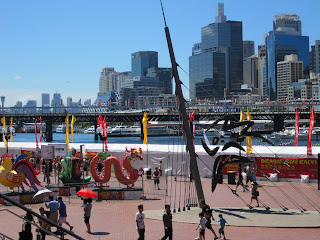 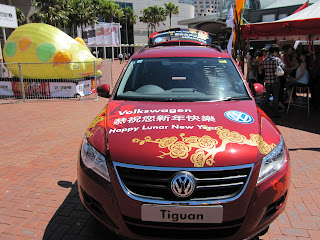 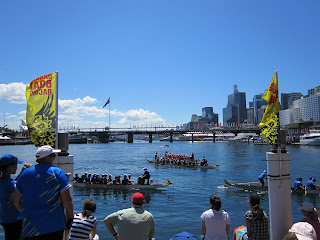 Above and Below: The scorching day @ CNY Dragon Boat Race Darling Harbour. 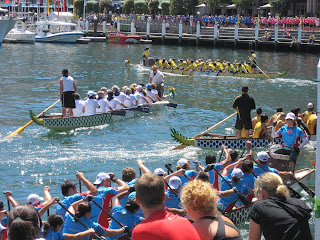 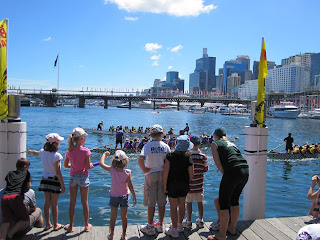 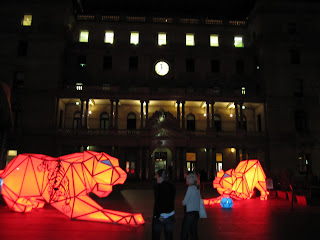 Above n Below: Special Zodiac Illuminated Lanterns @ Customs House and Darling Harbour respectively..the lanterns were really really pretty!..I feel the Chinese New Year Festival in Sydney is better and bigger each year..actually, for the past 2 yrs, Chinese themes/festivals have been very dominant in Sydney...even the NYE Har Bridge Countdown Fireworks ended with the very Chinese/Oriental Ying and Yang Symbol!... 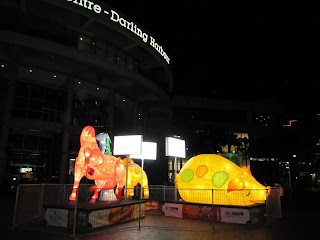 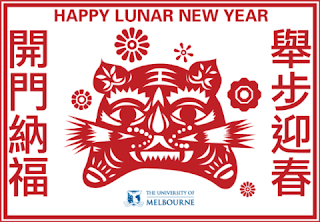 Above: May the Year of Tiger be a prosperous and fulfilling, smooth one for all:-) I copied the mark above from a Melbourne University Alumnae e-newsletter..
Posted by hcpen at 10:28 PM 8 comments:

This post is inspired by the 2 ads I saw on Gumtree Sydney in the past couple of months..now, there's alot of overseas students wanting to do language exchanges in Sydney and I check out the language exchange board quite often recently as I was looking for Japanese language exchange partners to restart my Japanese skills after a stop of several years. But then sometimes I will check out other ppl's ads for languages completely irrelevant to me. And, I notice alot of Korean international students wanting to do exchanges..(cos there's tons of koreans in sydney)...and i came across 2 ads by korean international male students..most were unremarkable, nothing fancy, but these 2 got my attention..the 1st time was one from this korean dude whom wanted help with his english and he started off conventional enough, with looking for english friend, welcome everyone,etc...until he ended with 'but please no gays'. And I was like taken aback, why would you say u welcome everyone, but, oh..sorry, no gays..and also it's really weird to end with this, seems like he's been meeting alot of gay men in his previous exchanges?! I didn't know gumtree's language exchange board had become a hot gay hook-up place..haha..
And then, several months, later, it happened again..but this time, in a positive way, but still specific mention of the 'gay men thingy'..so weird!...below is a copy-paste from the later ad: (hope there are no privacy/copyright issues!)
'hi!! my name is (korean name here). i came to Sydney for studying english. i'm 25 years old and majoring in chemical engineering. i'm looking for a friend who can speak english. but it doesn't matter you can speaking english or not. if you're a native speaker, it would be better. but i don't care. i want to swap languages but i also want to have a foreign friend. : ) and i'm male. so i prefer a female as my friend to a male. but male friend is OK. and japanese, chinese, aussie, thai, people from all over the world is OK.we can play sports among men. and i'm willing to be a friend with some gays because i'm very open minded person. but i don't wanna be your boyfriend. just friend is OK. why don't you contact me (contact details here).'
I was seriously laughing out loud (inside) when i saw this..it's so hilarious, he's like bcos he's a guy he wants a female more..well i guess this is the case in the gumtree language boards as i 've seen several of these white/asian guys whom post ads seeking 'nice korean/japanese/chinese ladies' for 'social outings, movies, dinners.''...well, more power to them, but if i were one of these ladies, i'd never reply to a post like that...obviously interested in the romance (and not to mention sex bit) more than the language exchange bit...and then the korean guy above does this really stereotypical thing mentioning guys are ok too as 'we can play sports among men'...haha....not all guys are interested in sports ok..this IS the 21st Century ya know...and he ends again, like the last guy i mentioned, on the 'gay thingy', but this time in the affirmative, saying he is willing to be friends with gays 'but i don't wanna be your boyfriend'...haha..so funny...what is it within the korean male circles in sydney that homosexual men are surfing the gumtree language exchange boards looking for korean hetero males?!! Or maybe these korean men have heard too much about Sydney (thanks to the annual Mardi Gras) being the gay capital along with San Francisco and other cities like Bangkok and Barcelona that they seem to think that gay men are everywhere on these msg boards?! Or maybe there's some truth in it..any koreans residing in sydney care to shed light on this? I just found it so hilarious that this 'gay thing' was mentioned by 2 korean men on gumtree...i certainly never heard of it before..all my exchange partners, including the men, were straight, to my knowledge..
Anyways, any korean men residing in Sydney care to enlighten me?
Or do most Korean male international students in Western Countries do this kind of thing? Gawd, it must be TOUGH being gay in Korea..
PS: I actually heard, in Korea, despite recent outward 'liberalisation' in attitudes towards homosexuality being the chic and trendy thing to do, in private/inwardly, people still despise and look down on homosexuals in Korea..sad isn't it? :(
PPS: You must be wondering why i have a photo of two naked men in homoerotic poses above..well, i've noticed everytime i have the word 'hunk' or 'gay' in my post, i get quite alot of traffic coming in from obviously gay quarters, so this one's for you gay readers and not to mention str8 female readers:-)
Posted by hcpen at 11:19 PM 8 comments:

Dear Readers,
I would like to wish you all a Prosperous and Fulfilling Chinese New Year of the Tiger! May You All Have Good Health and a Splendid Chinese New Year Period during this festive Season:-) Gong Xi Fa Cai:-)
With Heartfelt Regards, Chinese Chic blogger.
Posted by hcpen at 3:54 PM 14 comments:

The 1980s revigorated Hong Kong cinema and led to a 'New Wave' of directors and films with new themes as well as more commercial films as ever...

The famous stars of this era were numerous and it was clear that those whom grew up overseas (ABCs) and Taiwanese female stars were very popular. This can be seen from the top female actresses of the time. Sally Yeh and Maggie Cheung were two very popular upcoming actresses of the 80s and both grew up overseas. Representing the fondness for Taiwanese beauties in the cinema industry would be Brigette Lin, Joey Wong, and Sylvia Chang. Other famous stars of the era included Maggie Cheung, Cherie Chung, Dodo Cheng, Rosamund Kwan, Chow Yun Fatt, George Lam, Tung Biew, and Lydia Shum.

The 80s saw many movies showing immigration to Western countries as this was the decade that Hong Kong families started immigrating in droves, with the British signing the treaty to return the whole of Hong Kong, including HK island, Kowloon Peninsula and the New Territories back to China in 1997. At the time, this was viewed with caution and fear, and Hong Kong's new found wealth meant anyone with the means of immigrating immigrated. This can be seen in the series of film called : It's a Mad,Mad, World starring Lydia Shum and Tung Piew as the middle-class Hong Kong family with three children living in a crowded government housing estate and how they always seem to strike the lotto and their experiences of winning the lotto. In the later series, it shows them immigrating to Canada and their life there. This movie was an extremely popular series as it also represented the Hong Kong spirit and aspiration of striking it rich in the wild heady days of the economically booming Hong Kong of the 80s.

Joey Wong is most famous for her role as 'Siu Qing' in 'A Chinese Ghost Story' opposite Leslie Cheung. Leslie Cheung was also another extremely famous singer/actor of the 80s. He was one of the reputed top trio of highest paid/most popular male singers of the 80s in HK, along with Danny Chan, and Tam Wing Lun. It was his character as 'Gor Gor' in this movie which earned him this affectionate nickname later on throughout his life.

Sylvia Chang and Sally Yeh acted in the seminally important 'Shanghai Blues' in 1984 which was Tsui Hark's breakthrough movie and has since remained one of his most famous and perfect movies. It also started the nostalgic trend of movies/entertainment revolving around 'old Shanghai'.

Dodo Cheng was also extremely popular during the 80s. She acted in mainly romantic-comedies-horror and many other films. Her series of film 'Heart to Heart' is particularly likeable (Rosamund Kwan was in the original movie and she is also one of 80/90s top female stars in HK, being extremely beautiful..she looks not quite Chinese, i think kinda mixed, she apparently has Manchurian blood in her.) and she is also very famous for 'Her Fatal Ways' as a mainland Chinese cop going down to Hong Kong and poking fun at the 'backward village-like' ways of mainland Chinese as compared to Hong Kong residents whom looked down on the mainlanders back then alot.

And of course, how could I end without mentioning the always funny Sandra Ng, whom I simply adore and love, she was the top female comedian in HK cinema spanning the entire late 80s to the mid-90s. All her works are particularly funny and at the top of her career, she had to film several films at once. Her career in the 80s reflected what was popular back then and the way the industry worked. For instance, in the 80s films and scripts were finished within a matter of weeks or even days and movies were produced at such a speed that actors like Sandra would have to film 3-4 films at once, 7 days a week, without rest completing 1 film per week sometimes! Despite the speed of the script-writing process as well as filming, i love the horror-comedy films of the 80s, they're just so incredibly good! Chinese horror films were also extremely popular in the 80s with Chinese vampires, spirits,etc mixed in with comedy most of the time, reflecting the still traditional beliefs of hong kong residents despite their material wealth and appearances.