Today marked the 24th birthday of my life.....oh my goodness, i am getting older by the year!! I don't want to get any older!!! hahaha....
Today, by chance, is also the UN International Day for the Elimination of Violence Against Women which brings added special significance to my birthday, being the hardcore feminist that i am (haha)...so i am glad that in celebrating this special day for me, i am also celebrating the International Day for Elimination of Violence Against Women:)

Birthday wishes from readers anyone???
Posted by hcpen at 8:38 PM 4 comments:

AlJazeera English: A Different Perspective from the Arab World....阿杰志拉卫星新闻台，不同的观点...アルジャーズイラーニュース、アラブからの視点..

I discovered Aljazeera English Channel a few months back and have been meaning to blog about it for awhile. I simply love the channel with its focus on Middleeastern as well as Asian current affairs and issues. I especially like the Everywoman and East 101 show given the women's issue focus of the former and the East/SE Asian focus of the latter. It has broadcasting centres located in Qatar, Washington, London, and......Kuala Lumpur!!!

This means there is always a steady stream of coverage on South east Asian,and particularly, Malaysian issues. It has also helped to highlight Malaysia's presence in the (Arab) world.

I saw this program on apostasy in Malaysia which shocked me greatly and made me dislike the Malaysian government and the Malays as well!! I have never understood why the Malaysian Chinese dislike the majority Muslim Malay Malaysians and have always found it racist, but now i have more sympathies for their feelings after watching that program.
Its here if u r interested:
http://www.youtube.com/watch?v=mgnncfYRPxk

I love Aljazeera:)
Posted by hcpen at 9:39 PM No comments: 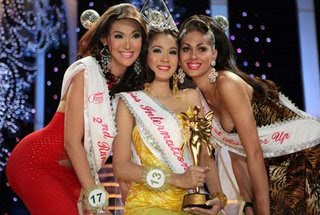 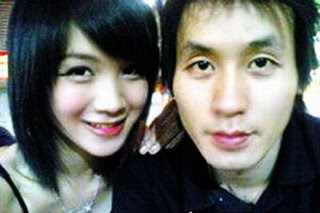 Now, if you thought these girls were beautiful, well...they are...but if you thought they always looked that way, or more to the point, that they were always girls, well, u r WRONG!
The photo above shows the winner and runner-ups for the world's largest transgendered beauty pageant, the Miss International Queen, held in Pattaya Thailand, which i read about on MSN China whilst surfing the web. The winner this yr is a uni student currently studying economics i think (the one in the middle in the top photo and second photo with her boyfriend) I just thought WOW how can a guy turn into such a pretty girl....anyways, heres the official website i found on the web:http://www.missinternationalqueen.com/
Take a look at present and past winners and contestants. It seems Thailand and the Phillipines produce the most beautiful transgendered women (in my personal opinion anyway!).
Posted by hcpen at 9:12 PM No comments: