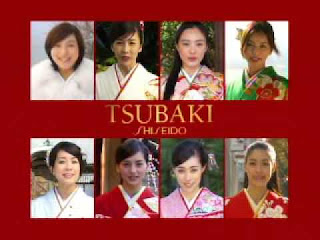 I fell in love with the Shiseido 'Tsubaki' theme song and commercial for their hair products a long time ago but only recently rediscovered the cm on youtube. God, the Japanese models/actresses featured are sooo pretty...i was basically enamoured by their beauty, haha... 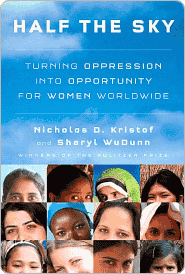 Today marks International Women's Day again....Oprah did a special show on Women's rights around the World sometime last yr...here's the link to the full show on youtube:
http://www.youtube.com/watch?v=1teYeYl-ggc
I bought the book she recommended written by Nicholas Kristof and his wife Sheryl Wu-Dunn.
It's called 'Half the Sky' reporting about the plight of women/girls around the world now in the 21st Century and what we can do to assist them.
They say micro-financing projects target 90% plus women as women borrowers, time after time, multiple studies have shown use their money responsibly in investing in their children's education/food,etc and have an extremely high repayment rate whilst men tend to use the money borrowed irresponsibly and show off to their friends. Men also tend to be worse at repayment of loans. Furthermore, a study i read about last month showed that men have less ability to feel remorse and regret for what they do (confirming my long held belief from life experience that men have less compassion/empathy GENERALLY (not saying every single male species or even a majority but just comparatively as against women). The study in the paper showed that men tend to feel guilt only towards themselves (selfish!) as opposed to women whom tended to feel guilt and care about how their actions hurt other ppl's feelings. Men tend to feel guilty about how their actions hurt themselves, such as feeling guilty about not exercising enough, or feeling guilty about eating too much unhealthy food. Indeed i think this study corresponds to another study done in the UK on prostitution which showed that men who visit prostitutes most often than not know that the prostitutes are either traffick victims or feel disgusted by what they're doing but the remorse/guilt they feel means they still go ahead with the service. The only effective way of stopping them from visiting prostitutes wasn't one based on compassion/empathy but one based on the more selfish reason of being detrimental to themselves, basically, if the police launched a serious crackdown which involved them getting prosecuted, fined, names published on newspaper,etc. Basically, confirming the earlier study on men being generally less empathetic towards other's and more concerned about themselves.

Men are also more likely to be racist, homophobic, sexist, and less tolerant/more extreme, according to one study of Australian men many yrs ago which i read in Melbourne in 2005. This may be true given the general impression we have that most of the extremist/terrorist are men and most violent attacks/crimes based on racism and homophobia are also committed by men. Its not a Coincidence that Our Jails are filled with Men, especially those committing the most vile and violent crimes..

Anyways, here's to celebrating IWD 2010 with all the excitement and motivation one can have, and not forget the achievements and adversities women around the world still face in the 21st Century. :-)

I attended 3 events of the Sydney annual Gay and Lesbian Mardi Gras this year, being the most events which i've ever participated in ...i usually attend the annual Parade...it's apparently one of the largest, if not the largest, gay and lesbian festival/parade in the world.


I went to Fair Day, my first time, which is a community event held at a park with about 70,000 people in attendance which launches the Mardi Gras official season which lasts 2 weeks this year. What surprised me was the number of straight families there bringing along their children..i even saw a middle-aged chinese man bringing along 2 elderly chinese women into the fair!

How mainstream gay events have become in sydney..a sign of the changing times...


I also went to the Mardi Gras Parade and also was an official Mardi Gras volunteer for one of the events, the one which i most wanted to participate in given the rarity of the opportunity: Spencer Tunick's Mardi Gras commissioned 'The Base' art installation. (google him if u don't know what kind of art he does!)

Photos from the Mardi Gras Parade: 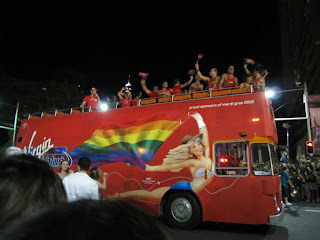 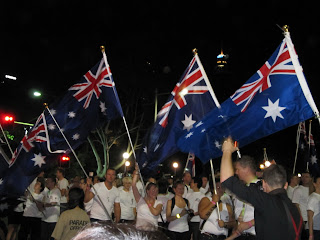 Above：Gay and Lesbians from the Armed Forces incl. airforce, army, and navy parading..it was eye opening to see gay soldiers..i even saw a gay couple holding hands..wow..it completely turns around the stereotype of gay ppl in the fashion, designing industry when u see regular-looking blokes whom are gay serving in the armed forces! 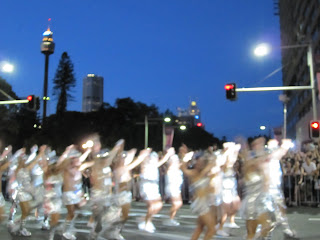 Photos Below from Before the Parade..most ppl arrived for front row seats 4-5 hours before the parade begins at 7 45pm at night.:-) 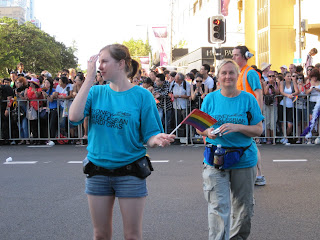 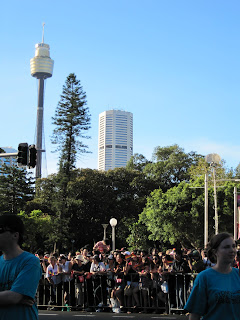 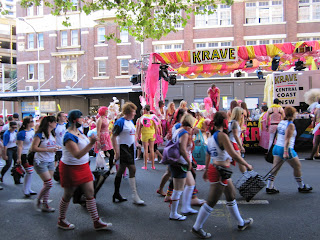 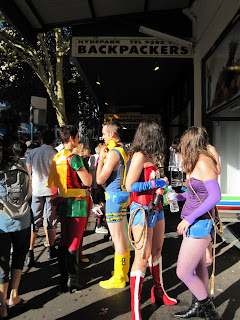 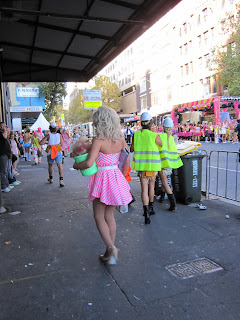 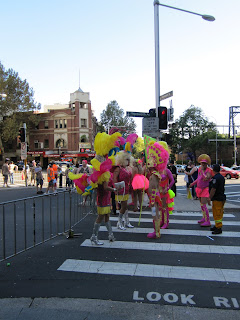 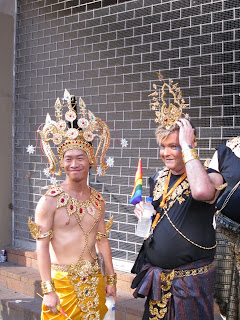 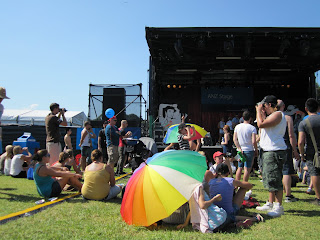 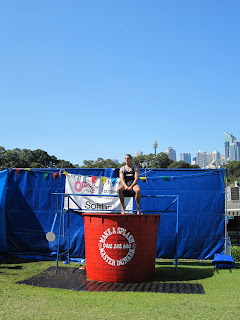 Above: So cool...for a coin donation, you get to hit once on the metal plate and if you hit spot on, the guy sitting there falls into the bucket of water... the view from the park of the Sydney CBD skyline was breathtakingly beautiful..i was amazed at the fantastic view and took plenty of pics. 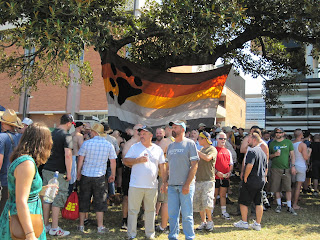 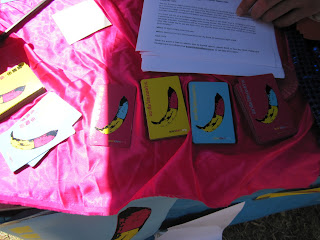 Above and Below: Some safe-sex pamphlets and volunteers with '69' on their singlets..hehe.. 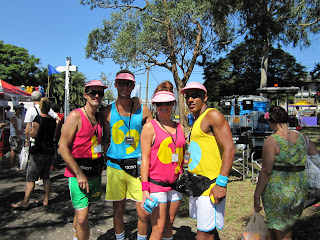 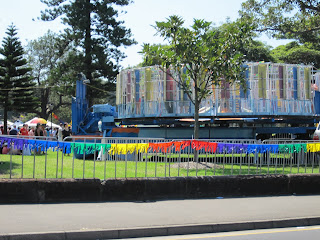 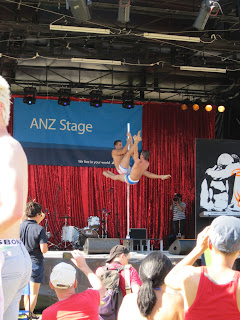 Above: Probably THE highlight of my Fair Day experience, buff men in tight spandex on the pole! I've prob never seen pole dancing in my entire life (except in movies, always female too) and to see men with spandex on poles..hehe.. 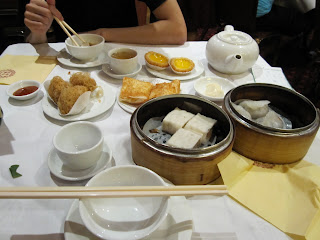 Above n Below: Since it was still CNY on Fair Day, had yum cha @Marigold Restaurant with a gay friend of mine before heading to Fair Day in the afternoon...there were quite alot of gay men at yum cha (prob went/going to fair day too) on the day..haha..my friend met a gay acquaintance at yum cha too...later on we saw them at the fair day again... 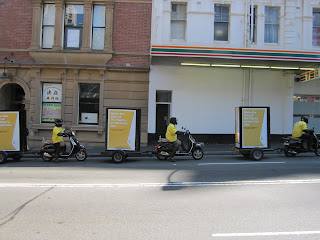 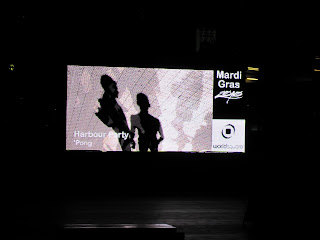 Photos from my volunteer work at Spencer Tunick's 'The Base' installation @ Sydney Opera House: Spencer Tunick's Sydney installation was commissioned by the Gay and Lesbian Mardi Gras and had the theme of tolerance/acceptance and all being equal amongst ppl regardless of sexual orientation. When i first heard of it, i knew i just HAD to attend, where else could i see thousands of ppl in their most frank form gathered at a famous public structure such as the Opera House in Sydney?! But i knew if i didn't participate, it'd be hard to go close up n take pics..then i realised they needed volunteers for Mardi Gras events..i volunteered for a couple of events but only got accepted (maybe i entered too late...) to this one which was the one which i wanted to do the most! Yesss!!! It turned out they needed the volunteers the most for this and in the end very little vol turned up as it was held at 3 30am on a weekday morning..since it was part of a gay festival, i expected some gay ppl to turn up, but omg, there were so many gay ppl there!ahahaha..like i'd say 1/3 (its called gaydar)..and they had to pose with the straight men and gay men and women,etc..i think the most awkward pose was when Tunick asked them to embrace the person standing next to them...omg, sooo awkward..and pretend to kiss!!! There was a 'threesome' straight consisting of 2 men and one woman pretending to kiss and in an embrace and standing RIGHT next to them was a 'threesome' gay male one of three gay men embracing and also pretending to kiss, what a sight, the threesome straight and gay right besides each other...Also saw an obviously straight pair of male teenage boys whom had come along together doing this 'manly arm wrestle pose' when doing this,(instead of the embrace) hahaha...so weird for them i'm sure...i noticed this two teenage boys bcos one of them had been swinging for like 5 secs his assets at the 2-3 helicopters flying overhead before, almost unbelievable for me to see this, almost like the gay/male version of 'girls gone wild'! haha! (cos the media were cordoned off to an area quite far off the actual site of photo shooting, many of the tv stations had helis flying overhead to get better footage!)
It was definitely a sight seeing many of the couples straight and gay, in their most 'ala natural' state, in embraces and kissing side by side!
I had expected it to be kinda erotic looking at it, but i realised when I was volunteering with the cold weather, it was just an amazing sight, nothing sexual at all, though i did see a couple of cute guys..hehe..incl an australian-chinese guy (u can tell by his physique and accent) but i was surprised i didn't let the shallow side of me take over and zoom in on certain ppl in their most frank form..but one thing, tan lines were very visible amongst australians! (something u could only ever know in events like this or maybe in the gym!) and westerners definitely had ahem, more 'well defined' assets...of cos, my attention were mainly with the men..hahaha...there were not only old ppl and liberal looking people, but i was surprised the no of ppl who looked totally normal rocking up..many good looking young men and women too, straight n gay...
and there were alot of asians willing to do this, i was surprised! i thought only caucasians would do something like this...it surprised me the no of ppl there willing to do something like this early in the morning! And despite it being autumn, the temperature was chilly, so u can imagine how cold it must be for the participants given the state they were in!
I had a great time there(even chatted with the female security guard, whom was from Canberra) and even got to see the installation inside of the theatres of the sydney opera house (there were altogether 4, 1 main group one forecourt of opera house, 1 smaller group inside, and 1male/female each only groups at the Royal Botanic Gardens..Definitely a Once in a Lifetime Experience:-) 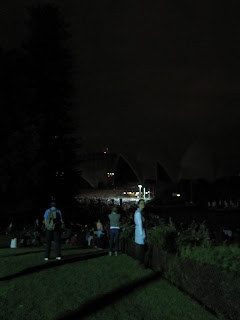 Above: Waiting @ Royal Botanic Gardens for the sun to come up for the shoot, March 1st 2010 sometime early morning..prob 5-6am... 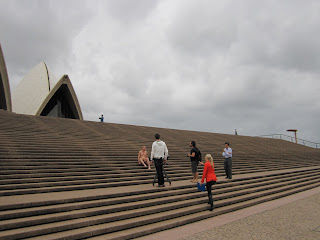 Above: Media ppl interviewing after the installation... 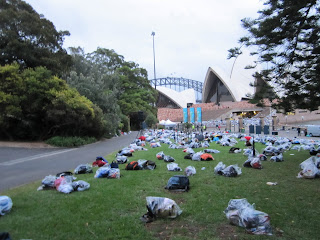 Above: Shot of the art installation on the steps of Sydney Opera House from Royal Botanic Gardens, all the plastic bags are for the participants' belongings... 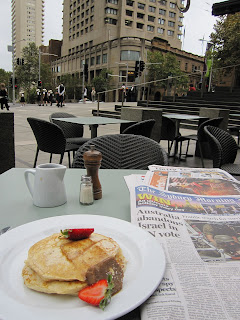 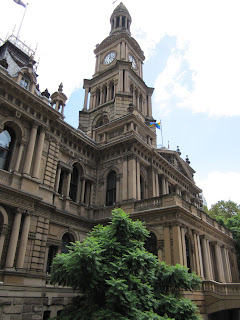