I have good news today!!!!!! I finally got my Australian Permanent Residency (PR) approved by the Australian Immigration Department !!!!!! I applied in May to stay in Australia as a Permanent Resident and when i checked this morning (i didn't place any hope that it would be approved as i was sure that with the lagging pace that they were going and the heavy caseload they had, the immigration dept. couldn't have approved my application yet given that i had only sent in my last document required (my overseas police check) this Tuesday) but to my utmost surprise, it was approved!!!
So I went straight to the Immigration Department near Central Station and got my visa label for my passport. This means I can stay on in Australia indefinitely, with a need for renewal every 5 yrs....this is good news for me!!!

I mean, the pay and living environment is better here in Oz compared to Malaysia (most importantly is the pay, cos i think Malaysia has its merits when it comes to living environment and standards as well) so i would like to earn here but spend and invest bck home....haha, so in the end Malaysia is gonna benefit more than Australia from me....i like having the option of staying or leaving Australia...and having the option is always nice:):)
Posted by hcpen at 2:29 AM 4 comments:

Taiwan's Annual Pride Parade, also Asia's largest Gay Pride Parade, was held on the 13 Oct with over 10,000 participants (15,000 by the organiser's estimates) estimated to have attended by the police. The theme this year was ' Rainbow Power' and as usual had a wide variety of marchers in different colourful costumes or lack of clothing..hehe...the guys in the short low- waist white briefs were soo sexy i was so oogling at them...i just love men in white tight spandex briefs, so sexy no?? 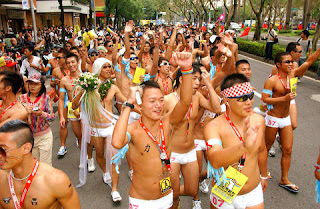 Its images like the ones above that have helped boost Taiwan's image and tourism amongst gay and lesbians overseas with at least 6-7 bloggers whom are homosexual that i know of whom have visited Taiwan in the past year. Images of these glbt people in their thousands being involved annually in the Gay Pride shown repeatedly on Taiwan's News Channels as well as passerbys on the streets have helped to shore up the visibility of Taiwanese gay men and women. Another thing to be proud of about Taiwan as a Taiwanese:)
Other News Around the Asia-Pacific Region:
Recently, a gay organisation voted for the top 25 most influential publicly gay people in Australia...it was very informative for me to know as I wasn't aware that many people I had heard of on TV were gay!! Savage Garden lead singer is gay as well as the High Court judge Justice M.Kirby (i knew about him already given his sexuality has been pretty well-known). But, the biggest surprises came from the political field with Greens Leader Bob Brown being gay and Labor MP Penny Wong being a lesbian. I am particularly proud of Penny given that she is the first Asian woman to be voted into parliament and further the first publicly gay woman in parliament. And more importantly, she is born in Malaysia!! So its a Malaysian-born Lesbian Woman in parliament...what a great success story for liberalism, given that she is a triple minority, being Asian, female, and gay, but still being able to get into parliament:) I'm proud of her achievement.
Christianity and Homosexuality:
Sundance Documentary: For the Bible Tells Me So
http://www.forthebibletellsmeso.org/background.htm
This documentary seeks to move the 'movable middle' of America whom are Christians and condemn homosexuality as a sin against the Bible's teachings. It shows five deeply faithful religious Christian families whom have a gay child and follows their journeys towards accepting the homosexuality of their child and reconciling their faith with this acceptance. It showcases many renowned Christian pastors and theologians whom seek to give audiences a different, more progressive reading of the Bible and includes such famous figures like the ex-Bishop Desmond Tutu of S. Africa and other names.
Islam and Homosexuality
A Jihad For Love
http://www.ajihadforlove.com/home.htm
I am very excited about this docu and highly anticipate watching it!!! This documentary deals with the extremely taboo subject of gay Muslims and how they reconcile their religion and their gay sexuality. The director interviews gay and lesbian Muslims from across the Muslim world and invites us into a peek at gay lives in the Islamic world and how religion and sexuality is reconciled for these interviewees. Highly anticipated!!!
Lastly, Singaporean Resources which i found (I've been experiencing a spike in my gay interest recently..haha..so i went surfing online and found two items i would recommend: http://www.safesingapore.blogspot.com/ (Founded by a Penang mother of Two Gay Sons ( 2! I know!!) now living in Singapore)
SQ21 Queer Singaporeans in the 21st Century ( A Book I Really Really Want to Have..)
Ok, I've been getting alot of feedback from some readers about my gay content and it seems i have a significant segment of readers whom are not comfortable with homosexuality...well, my advice is...TOUGH...given that i write widely on issues like women to world war 2, there is no need to read all my posts...just skip it if you really really can't stand it, but who knows, you just might come to see and understand another side of GLBT people from my occasional very gay and very happy posts:):)
Posted by hcpen at 4:46 AM 2 comments:

Malaysia has sent its first person to space today, making history, as the first South East Asian person to go to space. His name is Sheikh Muszaphar Shukor and is a Malay doctor. Apparently, he is becoming known as Dr.SMS in Malaysia due to the acronym of his name. I am really really proud that a Malaysian has now gone to space although there is debate on whether he is or isn't an astronaut but merely a 'space traveller' and that the government is paying millions of dollars to send a 'space tourist' to space. Notably, the entire space mission including the space shuttle taking him to space is Russian. But i think its still something we Malaysians can be proud of, even if Dr.Shukor's mission is largely symbolic in nature and not substantial in terms of showcasing Malaysian capability.
Another thing which caught my interest which i shall mention in Chinese so as not to offend any conservative Malay Malaysians or Muslims out there is the fact that i found it interesting that Dr.Shukor is still 未婚。他已34岁了，而且还是个医生。无论是年龄方面或职业条件，他还是单身身份都有点不寻常。马来人不是都比较早婚的吗？再说他条件这么好，人长得非常英俊，职业又这么好，一表人才，还没结婚的确挺可疑的。我相信你们该知道我在暗示什么吧？让后我在报上还看到他是兼模特儿。一个外形如此亮丽潇洒，已34岁的医生兼职模特儿的男生还未婚真令我怀疑。。
还是我想太多了？？哈哈。。只是我随便说说罢了，只不过觉得一般30多岁未婚当医生的男性还会愿意做模特儿工作应该很少见吧？
。。。。。当然，除非他是。。
Anyways, whether the mission is significant or not, whether or not Dr. Shukor is an astronaut, or a space tourist, or whatever else you wanna call him, one thing is for sure. Like SBS world news australia described him as having 'pin-up good looks' tonight on the news (i only found out about the malaysian space mission tonight!) He's SERIOUSLY CUTE!!!! Hehehe...:) 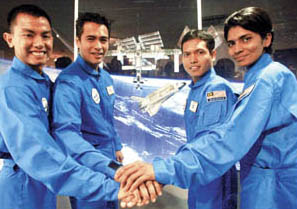 The Final Four Candidates in 2006 whom were selected out of the thousands of Malaysians whom applied. Significantly, one included an Indian woman, notable in that she was Indian, the smallest minority in the country, as well as the fact that she was a woman. 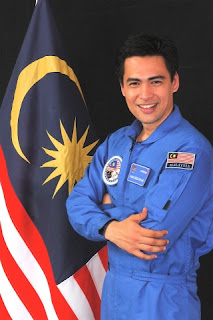 Sheikh Muszaphar set to be first Malaysian in space.

The Star Newspaper (Malaysia)
By JANE RITIKOS
BAIKONUR (Kazakhstan): Hospital UKM’s Dr Sheikh Muszaphar Shukor will make history when he goes into space on board the Russian Soyuz TMA-11 spacecraft at 9.22pm (Malaysian time) on Wednesday.
“It’s a small step for me, but a great leap for the Malaysian people,’’ Dr Sheikh Muszaphar – the first Malaysian to go into space – told the Associated Press, rephrasing Neil Armstrong’s legendary words after the Apollo landing on the moon in 1969.
He will spend 10 days in space, including eight on board the International Space Station (ISS) where he will be part of the ISS Expedition16 crew.
The TMA-11 craft carrying the 35-year-old doctor and his flight mates – Russian cosmonaut Yuri Malenchenko and American astronaut Peggy Whitson – is scheduled to dock at the ISS at 10.51pm (local time) on Friday.
Prime Minister Datuk Seri Abdullah Ahmad Badawi, Cabinet Ministers and 280 students will watch the live broadcast of the launch at the KL Convention Centre in Kuala Lumpur tonight.
On Sunday, Abdullah will hold a teleconference with Dr Sheikh Muszaphar who will then be on board the ISS.
Another first for the Malaysian Angkasawan is that he will be hosting a Hari Raya party on board the space station on the first day of Syawal. He has taken satay and some kuih Raya to treat the others on board.
At the ISS, he will carry out four experiments drawn up by Malaysian scientists.
Dr Sheikh Muszaphar is to study of the effects of microgravity and space radiation on cells and microbes, as well as experiments with proteins for a potential HIV vaccine.
The rocket – adorned with a Malaysian flag and coat of arms and carrying the Soyuz TMA-11 spacecraft – was moved on Monday to the launch pad from its assembly site at the Baikonur Cosmodrome, which Russia rents from Kazakhstan.
Malaysia is paying for the voyage as part of a billion-dollar purchase of Russian fighter jets.
Russia built the cosmodrome on the arid plains of Kazakhstan during Soviet times and has continued to use the site under a rental deal since the 1991 Soviet collapse.
Russia is marking 50 years of space exploration, having celebrated on Oct 4 the 50th anniversary of the launch of the first ever satellite, Sputnik.
Dr Sheikh Muszaphar is to return to Earth on Oct 21 with two Russian members of the current space station crew.
Whitson and Malenchenko will stay on as the station’s new crew, and will be joined in October by American astronaut Daniel Tani, who is arriving with the shuttle Discovery. Tani will replace fellow American Clayton Anderson, who has been at the station since June. 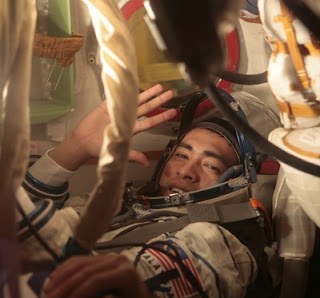 Hi Readers,
Been awhile, I am currently having difficulty finding a job that i like (you WON'T believe my luck*don't even wanna talk about it*) and which have good prospects for future development so i thought of giving my blog a try and seeing if fate would intervene and maybe someone who reads my blog or just happens to come across would be able to help....i am trying to find a legal job, preferably a solicitor based one/or media field is fine too, and preferably in Sydney, does anyone whom reads my blog know anyone, like a personal contact, be able to help me?? I am really at my wits end, i've tried but with no success for a long time...sigh...also i tried getting a part-time in clothing retail for months and walked in 30-40 stores but with no success, anyone know someone whom could introduce me?? I know probably no one would be able to help but no harm in hoping right?? Please please please help if you can cos i don't know many people...

On another note, I am now giving IELTS English classes as well as Chinese Mandarin classes for people residing in Sydney so do leave a comment and ur contacts if u or a friend is interested and living in Sydney...fees are negotiable and currently set at $800 for 30 hours with fees inclusive of all teaching materials, please do help me spread the word Sydneysiders!!!!! I would greatly appreciate it!!!

Anyways, to be frank, its been a pretty down period for the past couple of mths for me, something which I have tried not to mention in my blog, so I can only hope things get better...*fingers crossed*
Posted by hcpen at 11:40 PM No comments: