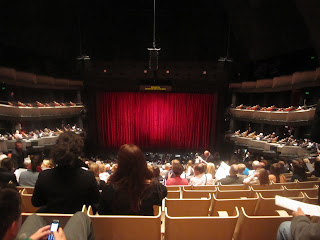 OMG,it's been ages since i last blogged..AGAIN..i've just not felt the motivation to blog lately..hahaha..been super busy with my life in Sydney..i had a busy crazy July with house parties, takoyaki party, nabe party, birthday parties, and August as well, with more birthday parties, brunches at friend's place/art gallery cos their place has so much art collection hanging on the wall that it's practically like an art gallery..anyways, i also rode the scooter (or more accurately, my friend drove me) across the Sydney Harbour Bridge all the way from Neutral Bay to my place in the inner city...was totally AWESOME..just like in the movies with the winter breeze brushing against me as i took multiple photographs along the way..hahahah..it was my friend's cool bike/scooter which looks more like a pro-bike..

ANYWAYS, besides my random update, this post is actually about the fact that i never once saw a performance at the Sydney Opera House DESPITE like almost 5 years living in Sydney...until like almost one month ago, when i obtained 4 free complimentary tixs to a charity performance called 'Pray for Japan Charity Concert' which was fantastic..i invited along 3 friends as well , n no one had been to see a performance at the Opera House before so it was good for us all..then the very next week, i got invited by a friend with free tix to see a musical opera again which meant i had gone to see not one, but TWO FREE PERFORMANCES @ THE OPERA HOUSE! I know..sometimes, things happen like, you don't get to see a performance at the Opera House for almost 5 yrs living in Sydney and then BAMM, you get two free opportunities and experiences to view performances within a week of each other..

Anyways, will try to update abit more..though, i dun know if it'll work..hahaha..been cooking alot recently as usual, since last yr, made california roll, penang char koay teow, etc...and also, one last ramble..i seldom see gay black men in the media, or even hear much about them, but apparently a CNN anchor has come out earlier this yr, called Don Lemon..and omg, he's really cute! He's already 45 yrs old but looks like 20 years younger with flawless skin..gay men and their good looks! Type in 'joy behar don lemon' on youtube to see what he looks like. (cos i can't seem to copy paste the link here!)