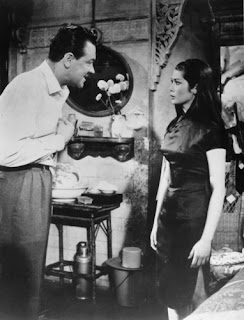 I would like to introduce to readers the Wonderful World of Suzie Wong, a 1960 Hollywood production which was a box-office hit in America. Set in 50s Hong Kong telling the tale of a 'Wanchai Girl' with a heart of gold falling in love with a poor American painter.
This film introduced to American and worldwide audiences for the first time the beauty of the 50s-60s style cheongsam worn by Chinese women in Hong Kong and South East Asia and very popular at the time. As a huge cheongsam fan myself, i loved the tight body-hugging high neckline n slit cheongsams shown in this movie as well as the multitude of on-location scenes of what Hong Kong looked like back in the late 1950s (priceless shots, really!). Please have a watch of what Hong Kong cheongsams (very accurate, verified from a cheongsam 'expert' like me! haha) and Hong Kong looked like back in its poorer days in the late 50s.
Entire film is available for viewing on youtube, here: http://www.youtube.com/watch?v=w9-A19RezTc&feature=player_profilepage
Also, I love RTHK (Hong Kong's only public broadcasting station) current affairs programs as well as docus alot. They show aspects of Hong Kong society which may not be readily known to outsiders, usually focusing on the underbelly and socially discriminated or disadvantaged groups in Hong Kong and their daily struggles and triumphs. I especially like how they focus on not only the problems of these people, but also on the kindness and unextinguishable spirit of the common person and the optimism and hope one can have to overcome adversity in life. The episodes are available online for viewing (for those whom understand Cantonese or can read Traditional Chinese characters as subtitles are available for most programs in Chinese characters.) here: http://www.rthk.org.hk/rthk/program_archive.cgi?progdir=tv/commonfolks&event_name=%3F%3F+%3F%3F+銋%3F+甇%3F+%0A
~Enjoy!
Posted by hcpen at 5:16 PM 2 comments:

In Asia, recent years have seen a flourishing of Gay films in the mainstream media and undoubtedly, Taiwan and the Philippines have led this queer Asian film charge ahead of other countries such as South Korea which have also produced many gay-themed movies...as i said before, I believe in Asia, the most gay-friendly countries are definitely Thailand, the Philippines, and Taiwan. In terms of media coverage, the Philippines definitely comes up on top for its gay-friendly and wide-ranging exposure of gay storylines/characters whilst I'd say Taiwan comes in second in terms of media queer-friendliness.
There's been many gay Filipino films in the past 5 yrs, and this yr there's been many films as well..but i'm only looking forward to 'In my Life' by Philippine's veteran Star 'for all Seasons' Ms. Vilma Santos, one of Filipino Cinema's most recognised and esteemed actresses as well as starring John Lloyd Cruz, the leading Filipino box-office lead currently as well as hunky Luis Manzano! 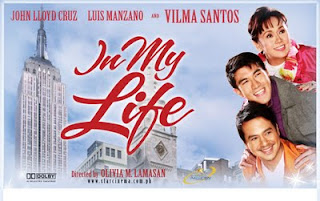 Here's the trailer: http://www.youtube.com/watch?v=Kf9ae_0f_jQ
A Taiwanese film dealing with the same theme of gayness is the film which is produced by veteran and probably THE most famous Taiwanese producer/screenwriter Wu Nien-Jen of the film 'Tou-San' (1994) fame. I'm really looking forward to this film about a colour-blind young girl and her gay cousin living in a small fishing village in rural Taiwan.

Here's the trailer: http://www.youtube.com/watch?v=G5cx-uf18xk
Another gay Taiwanese film, Neon Hearts, being an interracial romance between a teenage Swedish boy and a teenage Taiwanese boy, is also coming up this yr, trailer:
http://www.youtube.com/watch?v=K5r06evlreE
Given it's three gay male films to look out for pointed out for this year, lesbians, fret not, there's been many lesbian themed films and i personally like 'Saving Face' made by Taiwanese-American Alice Wu starring Lynn Chen (she's gorgeous!), Michelle Krusiec (i identify alot with her personality), and Joan Chen, whole movie here from 2004: http://www.youtube.com/watch?v=wVVQq9Hkjuk
Also, one of my all-time fav Taiwanese films (note this is not just for the LGBT category but for the Taiwan Film entire category, it's THAT good for me.) which i first saw at the Melbourne In'tl Film Festival bck in the early 2000s and had not much expectation but was overwhelmed by the finishing scene-Blue Gate Crossing. Fan Trailer here: http://www.youtube.com/watch?v=viiPb6z1ues&feature=related
Not to mention, THE BIGGEST NEWS out yet this year, in the HK entertainment industry, ...hold your breaths ppl (for those familiar with Hong Kong's entertainment scene ala 80s/90s)...Vivian Chow, the most celebrated and 'originator' of the term 'Jade Girl' in HK, whom retired from filming in 1996 and was well-known for being THE Jade Girl of the 80s/early 90s is making a comeback to the big-screen! And in a lesbian romantic comedy opp. Sandra Ng (my FAVOURITE HK comedian actress of ALL-TIME) to be funded by Wong Jing and helmed by esteemed award-winning director Ann Hui-On Wah. OH MY GOD. This is BIG. BIG NEWS. Given Vivian Chow's choice of this movie as her comeback movie after a 13 yr hiatus, it shows how much society has changed that a romantic comedy dealing with two lesbians can be made into a commercial mainstream hk flick, and also HK's pre-eminent Jade girl, known for her feminine, good-girl image from the 80's would choose this lesbian romantic comedy as her comeback movie..i can't wait!
Now, whoever said Asia was behind in terms of queer representation in the media and positive images/role characters in its media? I'm constantly doing my part to correct this incorrect perception many Westerners, Asians, and even gay Asians have that somehow or other, Asia is very behind in terms of gay rights, visibility, role models, when it isn't! In certain countries in Asia it is the case (re: Bangladesh, Malaysia, Singapore, Indonesia,etc) but definitely not in Taiwan and the Philippines, two countries which hold a very special place in my heart!
PS: Update 29/10: Taiwan's Annual Gay Pride Parade, held in Taipei and also Asia's largest gay pride parade, will be held on 31st October 2009. My very best wishes to my compatriot Taiwanese as well as overseas participants whom will be attending (predicted to surpass 20,000 marchers this yr!) . In addition, Discovery Channel Taiwan has decided to broadcast Taiwan's very first Documentary focusing on contemporary gay & lesbian Life in Taiwan and societal/political acceptance and changes in the past decade or so.
Trailer here: http://www.youtube.com/user/lovepeacing2009#p/a/u/0/ckS0ou5eA_8
(I SOOO wanna see this!! Please record it and put it on youtube and inform me anyone living in Taiwan! Pretty pretty PLEASE?!)
Posted by hcpen at 2:34 AM 13 comments:

I came across these documentaries ( i love docos!) on youtube and thought i'd share it with my fellow bloggers and blog readers, i was simply disgusted when watching them, i wanted to puke ..men, the root cause of all evil..and ppl ask me why i'm such a militant feminist..:

On another unrelated but equally important note, did ppl know that world hunger is becoming a more and more serious problem now? It is estimated by the UN World Food Program that over 1 billion people are starving or suffering from hunger currently (YES, 1 BILLION people, meaning 1/6th of the world's entire population are currently suffering from hunger). And also apparently every 6 seconds, a child dies from hunger in the world today. Truly depressing figures.
Link to an Aljazeera Program (my fav English cable news network) on World Hunger: http://english.aljazeera.net/programmes/insidestory/2009/09/2009920134113629813.html
Oh gosh, with my post on child prostitution and world hunger, this post is truly very depressing ain't it??
Posted by hcpen at 10:56 PM 10 comments: 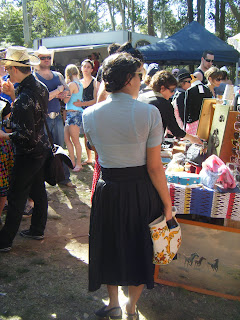 When i chanced upon the advertising leaflet promoting the 15th Annual 'Fifties Fair' in Sydney, I knew I just had to go!!!! Given that I am a 50s/60s fan of the cheongsam and that era, how could I miss it! What better way to spend a Sunday afternoon mixing amidst the crowd of 50s inspired and dressed ppl and pretending that I had been transported bck to the 1950s. Of cos, for Chinese representation, I wore my cheongsam top there..heheh..

I was very surprised to see the huge crowds there as the location is in Turrumurra which is really far north away from the city and inner suburbs, on the outer edges of Sydney already and tics cost $20 per adult and $55 per family which was quite costly, especially in a global financial crisis and with this being such a niche event, frankly i was expecting not many ppl to turn up..but boy was I wrong!! There were throngs of ppl and even queues to enter the fair! Cos it's held at this 40's built heritage house and enclosed garden estate and not very big...there were many ppl in 50's inspired fashion parading about and a 50s fashion contest as well as 50s style music and dance presentations ( i enjoyed the dance presentations alot!!!) and lots of stalls set up selling 50s/60s collectible items and fashion such as magazines, dresses, ties, shirts, 50s floral prints, etc..

Anyways, let the photos do the talking! 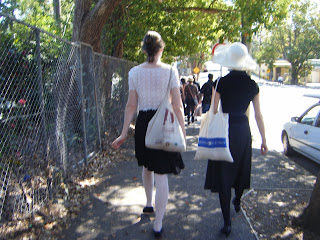 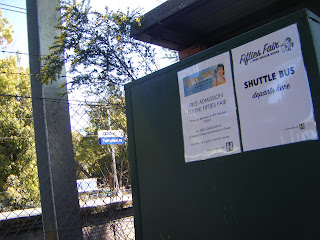 Above and Below: At the Bus Stop waiting for the shuttle bus to ferry us to the Fifties Fair.. 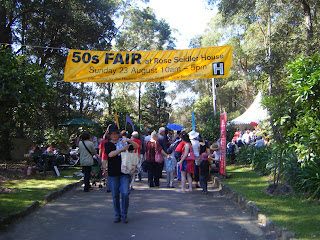 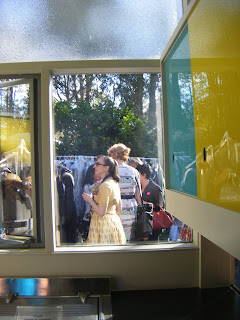 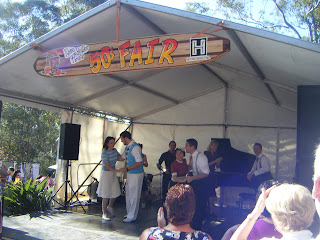 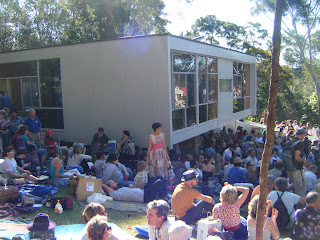 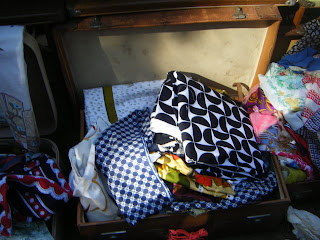 Above and Below: 60's Style...I was tempted to buy the 50/60s printed cloth cos what better way to make a cheongsam-inspired creation than with original 50s cloth material???? 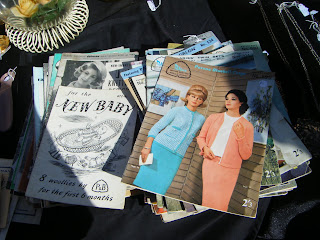 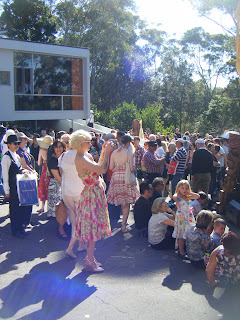 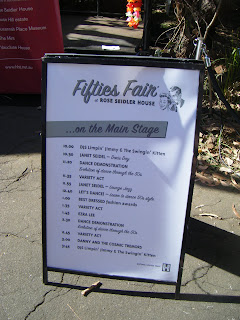 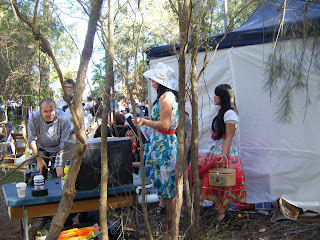 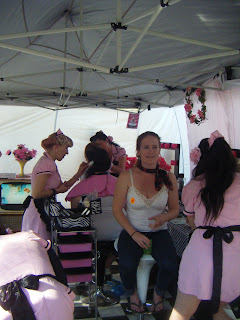 Above: Women getting their '50s makeover' at the booth... 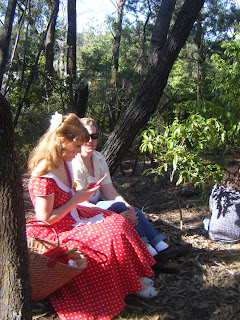 Above: Lil' red riding hood with her cellphone..hahaha.. 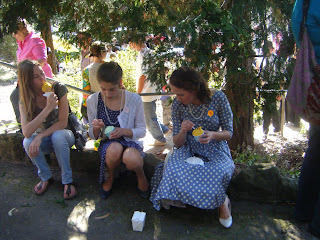 Above: Girls digging into their ice-creams on a warm Winter afternoon in their fifties outfits... 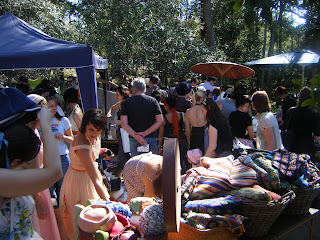 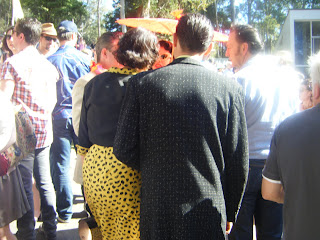 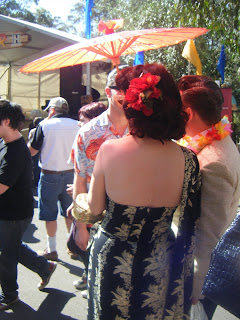 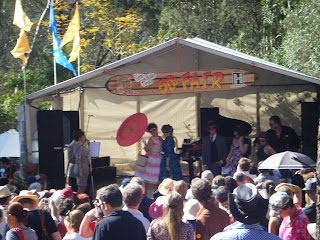 Above: A sign of the times...guess whom won the 'Best 50s Couple' category..yep, the two ladies in the above photo..hehe..whether they're a real lesbian couple or not, it definitely goes to show a sign of the times, when a same-sex couple can beat the other straight couples to win a best couple contest..hehe.. 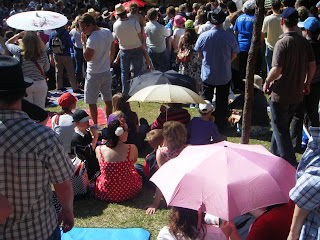 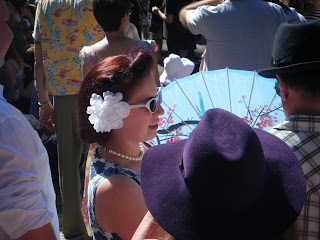 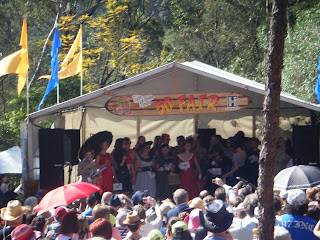 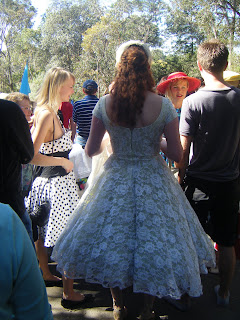 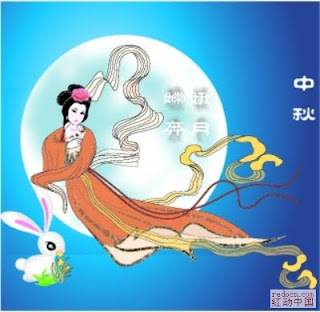 Happy Mid-Autumn Festival my fellow readers~
Hope you all have a wonderful family gathering +reunion, and of course, have plenty of mooncakes too!
I've already had my fill, i like only the white lotus mooncake without the egg-yolk. I usually buy the ones imported from Hong Kong called 'Wing Wah Mooncakes', which is freakin expensive at $41 per box of 4 regular sized mooncake without egg-yolks..but quite ok if you share with friends the cost...what type of mooncake variety do my readers like? With the consumerism culture and innovative designs available nowadays, there's plenty of varieties and unique tastes to choose from, so do share readers!!
PS: For those whom wanna know more bout the story behind the Mid-Autumn Festival, click on wiki here:http://en.wikipedia.org/wiki/Mid-Autumn_Festival
Posted by hcpen at 12:16 AM 15 comments: