I haven't been blogging much recently as lack of motivation...will try to do more soon..a long postponed blog post first...I went back to Malaysia in Dec 2012 (last year) after 2.5 years away and met up with many highschool friends and relatives and was very very happy.:D It was nice to catchup with people and friends in general again, especially those I haven't seen in ages.:D

I also visited Taiwan after almost 4 years to see my grandpa and Taiwanese relatives from my Dad's side and it was really really good and great to catchup with people  after 4 years! I (re) visited many places in Taiwan again, doing a little round island tour again, being Taichung, Tainan, and Kaohsiung this time. I also attended my cousin's main wedding in Kaohsiung (and the one in Taipei too!) which was quite an experience as I have never attended a Taiwanese wedding in my entire life, and on this  first occasion, I got a closeup of the 'real deal' with my own cousin getting married and I was given the opportunity to have a close-up look at the intricacies and customs of a Taiwanese wedding. 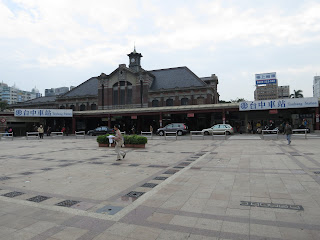 Taichung Again!: D ps: I finally got to visit and try out the delicious Taiwanese pastry and Ice-Cream Store 'Miyahara's' near Taichung Station-Sooo unique and worth it!!:D

They are quite traditional with us all having to get up really early in the morning (like 6am) to welcome the groom and his entourage to the house (pity them, it meant the groom's entourage had to get up even earlier to come to the bride's place!) and played some typical Chinese wedding games and rush the bride (my lovely cousin!) off to the groom's place as they had this 'lucky  timing' thing going on...

As the main wedding was situated in the south in Kaohsiung, I got to experience the typical 'Southern Style' Taiwanese wedding banquet with a makeshift stage and performers dressed scantily belting out local Taiwanese and Mandarin songs as one dish after another dish came out...it was surely an insightful experience and the Taipei lunch banquet was held in a special ceremony/weddings hall with modern style decorations,etc...was lovely!!

I took time out to visit Hong Kong again for New Year's Eve and got to see the fireworks (albeit very blocked!!) at East Tsim Tsa Tsui Area with the crowds...was an experience and had supper had Tsui Wah Chachaanteng on Hong Kond Island afterwards at like 1am or something...there was crowd control and it was quite an experience to witness and experience New Year Eve's in Hong Kong with all the masses and throngs of people in the MRT and on the streets of HK's Central and especially the crowd control which forced everyone to walk in long-winded routes around Central in Hong Kong, as I attempted to make my way back to the hotel passing Lan Kwai Fong with all the party-goers!:D 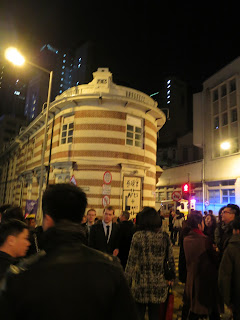 Central, near Lan Kwai Fong/NYE 2013.:D
I visited other places in Hong Kong this time which I had missed out on previous trips, such as Stanley Markets area, and Tai-O fishing village. I skipped the Lantau Big Buddha and other places which I had visited last time...overall, was a fantastic and memorable trip, not least cos I got to see my 'Hong Kong Aunt' whom I hadn't seen in over two decades I think (she is the only foreigner on my mum's family's side whom married my uncle, they divorced in the early 90s) and had a nice catchup lunch with her during her lunch break at the classy and nice Lounge restaurant at the Four Seasons Hotel near the IFC in Hong Kong..it was certainly an exquisite and memorable meal to remember for years to come...:-D

Going back to Malaysia and Taiwan, I had a wonderful time pigging out and enjoying myself, spent Christmas at my aunt's potluck in Penang and had wonderful homemade 'Chai Buey; and 'Tempura Prawns'...yummy!! I got to meet my cousin-in-law for the first time as well there...was great! 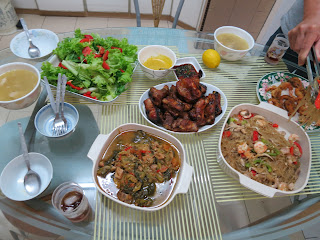 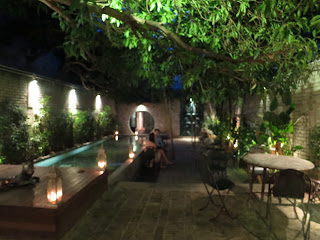 'China House', one of several cool and hip places that have sprouted up in Penang since these past 2.5 years.:D
I managed to meet one of my uncles and his family after several years too, in Taipei, as they moved to Chile as diplomats several years ago and I never met them on my previous trip back to Taipei...and it was like time stood still, they hadn't changed much although their children are all grown up now!:D

I slept over at one of my Aunt's place for one night again this time, like all my previous trips (she's also my Taiwanese 'Godmother' besides being my blood aunt) and her husband took me around touring ala Taiwanese 'style' on his trusty Taiwanese motorbike, and we managed to take in the sights at several places, in a quick and effective manner..my greatest thanks to him..:) 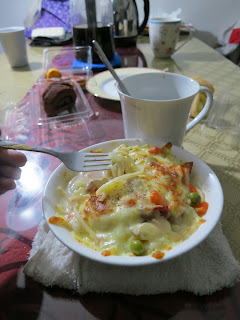 Taipei-Aunt Precious's Place-Homecooked Macaroni with tons of cheese!!:D
Anyways, too many good food, places, and people to talk about in this very  concise blog post, but that sums up my vacay back home I guess after several years...already planning to go back again within 1 year, during end of this year's Christmas break actually...till my next blog post then:D