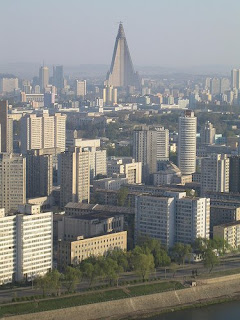 Above: An aerial photo of Pyongyang, capital of North Korea, which looks quite modern but is in fact a tourist and propaganda facade to mask the dire straits of the reality of life in North Korea. Apparently, the roads are empty in Pyongyang as throughout the entire nation and many buildings have no occupants being built for mere propaganda purposes.

North Korea, a place which is closed to the outside world. The world's most reclusive state. I think my interest in it arose in the mid-2000s when i was still in my South Korean drama/movies mania and checking out about Koreans in China (there is a minority living in China whom are Chinese citizens in the Northeast of China) and heard about North Korean refugees there. Being a reclusive state also meant it was an interesting place to learn about, being the last Stalinist state in the world now and THE most closed and oppressive country in the world, rivaling places like Cuba and Myanmar.
North Korea suffered a famine from the mid-90s to the late-90s and it is said that at least 2 million people died then. The country still relies on food aid from the UN and countries such as South Korea, China, and the USA as well as Japan to feed its population as it does not have self-food sufficiency ever since the devastating floods of the 90s and the collapse of the Soviet Union and other communist countries in the 90s which had guaranteed it trade markets.
Many North Koreans have secretly crossed the Yalu River into China over the past decade or so as refugees seeking food and jobs as conditions have worsened in North Korea and China has become more and more prosperous. They face deportation if captured by the Chinese police and would certainly be faced with harsh punishment in North Korea for leaving the country. This will however be a topic for another post in this continuing series on North Korea.
Below are some links to documentaries which I find interesting and insightful into life in North Korea:
Lisa Ling's Inside North Korea:
http://www.youtube.com/watch?v=kjiLVgQ34i0&feature=channel_page
Friends of Kim:
http://www.youtube.com/watch?v=C76HqPaA6kw&feature=channel_page

One of the most paranoid countries in the world, and a big international headache because of its WMD, criminal activities and its general opaqueness.

It seems like their overriding motivation is to preserve the status quo, so that the people at the top can continue to live the good life. Using propaganda, paranoia and repression to keep the people in line, and not admitting to failure (even if that led to the deaths of millions of their own people) if it means losing "face".

It will be interesting to see what happens, whether it stumbles on under the Kims (or changes management) as a pariah, whether it opens up and changes gradually, or whether it collapses in an unsightly mess. The poor South Koreans, living next to such a weird and dangerous place, with the possibility of a failed state next door. I hope they are studying how the Germans managed their reunification and are making some serious plans!

aimlesswanderer: yea,i always wondered how Seoul which is one hour drive from the North Korean border could be safe and develop so much with such a paranoid state just above it..i mean the contrast between South and North is just so great!!:-)

I have read a few things which suggest that some people in the South have very, umm, naive views about the North, so they may be less worried than I would be. I suppose that you'd get used to it to an extent too.

But being within possible artillery or certainly missle range, and having so many brain washed soldiers nearby.... not good.