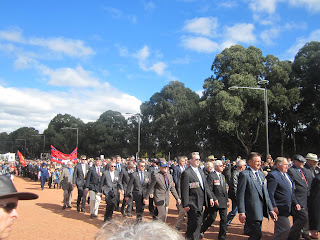 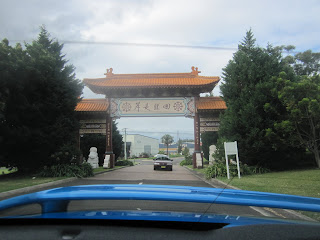 I went over the long Easter & ANZAC day weekend here in Australia to Canberra on a roadtrip with my housemates..the 4 of us had a roadtrip along the coast on the 'Grand Pacific Drive' going down along the coast stopping at scenic tourist sites, beaches,etc. We stopped over and had a picnic with dips and chips at Wollongong Beach near the lighthouses as well as visited Nantien Temple in Wollongong (the largest Buddhist temple in the Southern Hemisphere!) which was much more beautiful and amazing than I thought.:-)

We also visited Hyams Beach, Jervis Bay as well as Pebbly Beach whereby we encountered wild kangaroos hopping (the 1st time i had the experience of a kangaroo hopping so close to me!!) hahaha...anyways I've always loved Canberra in autumn and its autumn foliage and scenery and this time was no different. We rented bicycles and spent a full day riding around Canberra and admiring the sights as well as took a pic in front of our respective embassies in the Embassy District in Canberra (Australia's National Capital City). Had indian at a nice restaurant, lunch at a terrace overlooking the lake and rode around the lake visiting Parliament House, National Museum of Australia as well as attended the National Ceremony for ANZAC Day given that the last day there fell exactly on ANZAC day:-) Visited the War Memorial after as well...was an amazing experience overall, especially the roadtrip! Been awhile since i did a roadtrip in Aus:-)

Anyways, Hope you all had a fantastic Easter long holiday (over here in Auz that is!)

PS: Spent the last public hol day (Easter Tuesday) with a friend at World Sq Thai Express using the superb 'Sydney Entertainment Book' discount vouchers I had as well as afternoon tea at a cafe along Victoria Road Darlinghurst..the nice trendy area..hehe..I had a super Easter longweekend this year!!:-)
Posted by hcpen at 9:57 PM

hihi..
do u mind if u add me into your msn list.
i have got some questions regarding to NAATI
=)
thanks